Sara Bard Field: Ahead of Her Time 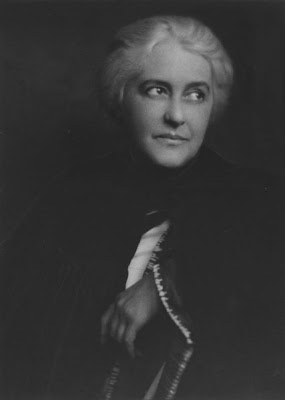 Sara Bard Field was born in Cincinnati, Ohio to George Bard Field and Annie Jenkins (Stevens) Field in 1882. Her father was raised with a strict Baptist background, and her mother was of Quaker origin. The backgrounds of her parents greatly influenced her childhood and youth. Her father ran a very strict household with a loving wife and mother, who exercised more tolerance and care with her children. Sara experienced a conventional life of a middle class family, while living in Detroit, where they had moved after their time in Ohio.

When she was just 18, she married, Baptist minister, Albert Ehrgott, and accompanied him to his mission in Rangoon, Burma. Her experiences in Burma and India significantly widened her views on religion and social injustices. When they came back to the United States in 1903 (after the difficult birth of her first son) they were assigned to a church in Cleveland, Ohio where she started to work for social reform. After she started her work, her daughter, Katherine, was born in 1906.

During these times, Sara considered Christian Socialism to be a possible answer to the problems the world was facing. With her sister, Mary, she continued to work alongside American reformers. It’s no surprise that after her family moved to Portland, Oregon in 1910 that she joined in the struggle for women’s suffrage. She worked alongside Alice Paul, Emma Wold, Alva Belmont and many others. She worked as state organizer for the campaign that won suffrage in Oregon in 1912. At this point, she was doing a lot of work, which forced her to spend time apart from her family. She spent many summers traveling through her state speaking in towns to get the word out. She also made an auto journey across the country to petition President Wilson in 1915.

After these years of hard work, Sara decided to concentrate on her personal life and started to develop her own poetry. She produced two collections, and much of her poetry appeared in political and literary magazines. She socialized with John Steinbeck, Ansel Adams, Robinson Jeffers and many others. She was not without her own personal tragedies. She divorced in 1914 from her husband and formed a deep attachment to her new companion, Charles Erskine Scott Wood. She also dealt with the very heavy blow of the death of her son in 1918. It is fair to say, that the death of her son (with whom she shared a close relationship) affected her for the rest of her life - understandably, she found it very difficult to come to terms with this tragedy.

Sara and C.E.S. Wood (who went by "Erskine") began their lives together in San Francisco in 1918. Erskine also wrote poetry and branched out his works into social criticism essays. These two had a 35 year literary collaboration and their shared home in San Francisco became a meeting place for artists and writers in the Bay Area. When their moved to their new home “The Cats” at Poet's Canyon in Los Gatos, CA, their intellectual visitors followed. Sarah and Erskine were finally married in the later 30s (his first wife refused him a divorce) and spent their remaining years in Los Gatos. Erskine died in 1944, and in 1949 Sara was able to publish his Collected Poems. In 1955 Sara moved to Berkeley to be close to her daughter and her daughter’s family. In the early 60s she was able to record her oral history through the University of CA, Berkeley which tells the exciting story of her life. She speaks frankly, but poetically. Her views especially on social concerns and women’s issues certainly seemed ahead of her time. After such a full life, she died in Berkeley in 1974.
Posted by Val at 12:31 9 comments: Links to this post

"The Butcher of Verdun" ?

It seems strange to speak of the The ‘Battle’ of Verdun, which took place between February and September 1916, since I think of battles as being won or lost in a day but this was one of the bloodiest and most horrific episodes in the whole of the senseless war of 1914-1918. The intention on the part of the Germans was to seize the fortress town of Verdun not only because it would allow them to break through the French lines and march on Paris, but also because the place, which was the last fort to hold out against the Prussians in the Franco-Prussian War, had a great symbolic significance to the French. Due to its strategic and symbolic importance, the place had been well-fortified in the years between 1871 and 1914 and was surrounded by a ring of other forts. 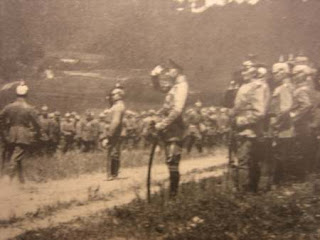 According to some reports, which are now being questioned by certain historians, the Germans had another motive in attacking the city. The Chief of Staff, Falkenhayn, is alleged to have claimed that his intention was to ‘bleed France white’. From the icy days of February, through to the sweltering heat of May, the German artillery unleashed a series of relentless bombardments the like of which had never been seen before. The resulting injuries are too horrific to begin to describe – one can only imagine the long-term effects on the soldiers of witnessing such horrors! – and the losses (on both sides) total over 700, 000.
The scale of the slaughter and the vileness of the whole campaign cannot be underestimated but, long after the war was over, one man was unjustly left to shoulder much of the blame. Crown Prince Wilhelm of Prussia, eldest son and heir of Kaiser Wilhelm II, was the commanding officer of the Fifth Army, which played a major role at Verdun. Undoubtedly due to his high profile as the Kaiser’s son, the Crown Prince was portrayed on numerous Allied propaganda posters as the ‘monster of Verdun’ – illustrations showed him devouring women, children and babies, and laughing demonically at the carnage. The notion these posters invoked became a myth and, later, the Crown Prince was known as the ‘butcher of Verdun’ or the ‘laughing murderer of Verdun’.
In reality, within a few weeks of the initial attack, the Crown Prince was disgusted by the slaughter and, concerned, too, for the welfare of his own men, he repeatedly wrote to the General High Command requesting an end to the campaign but his requests were ignored:
“Consequently, I soon did everything in my power to stop the attacks; and I repeatedly gave expression to my views and the deductions to be drawn from them. In this matter I stood somewhat opposed to my then Chief of Staff, General Schmidt von Knobelsdorf, and my representations were at first put aside; the orders ran, "Continue to attack." "
As early as November 1914, the Crown Prince had written (sincerely quite justifiably, I think): “Undoubtedly this is the most stupid, senseless and unnecessary war of modern times. It is a war not wanted by Germany, I can assure you, but it was forced on us...” , and, unsurprisingly , his memoirs, written in exile soon after the war, show his bitterness as the unjust allegations heaped upon him. 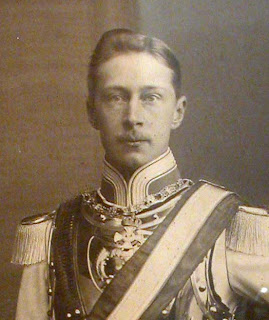 “The laughing murderer of Verdun? So that’s what I am, is it? One might almost come to believe it is true after hearing the calumny so often. It cuts me to the quick because it concerns what I have saved as my last imperishable possession out of the war and out of the collapse. It touches my unsullied memories of my relations to the troops entrusted to me. It touches the conviction that those men and I understood and trusted each other, that we had a right to believe in one another because each had given his best and done his best.”
He goes on to recount various episodes which demonstrate his concern for his men and the rapport he had with them.
So many atrocities were committed by all sides in the First World War, that it seems that it is simply because he was the son of the equally unjustly vilified Kaiser, that the Crown Prince was made the scapegoat for the particular horrors of Verdun. In truth, he was one of the few commanders who petitioned for an end to the slaughter and by 1916 he was actively trying to create a peace accord and bring that whole pointless war to an end. Verdun was butchery...but Crown Prince Wilhelm was not the butcher.
Posted by Christina at 04:02 4 comments: Links to this post