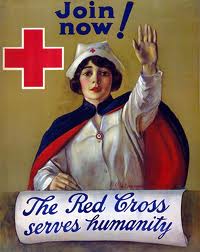 I think it was Henry Fielding in ‘Joseph Andrews’ who pointed out the difference between vanity and hypocrisy. Vanity, he said, involved a person doing good in order to be seen and praised; hypocrisy involved a person doing evil under the guise of good. The definitions came to mind as I began to discover more about the so-called American Red Cross mission to Russia in 1917.


Surprisingly, this ‘mission’ of 24 people comprised only 4 doctors and the rest were financiers, photographers and lawyers, and the mission leaders lived in the most expensive hotels, taking photographs and, no doubt, eyeing the resources of the country to which they had not had access under the Tsar.


In fact that mission, financed by J.P. Morgan (and probably donations from the sincere and well-meaning American people), had very little to do with the American Red Cross, which was actively working in a far more constructive way in various other countries. This mission, however, had a very different agenda – that of the Wall Street bankers and international financiers who had been involved in prolonging the war for financial gain, for access to the Russian oilfields and, of course, as part of their plan to dismantle all the autocracies of Europe.


Calling this the ‘American’ Red Cross Mission is as greater a misnomer as calling it a ‘Red Cross’ mission, since this had very little to do with the American people at all. It is interesting that until the end of 1916 and the beginning of 1917 most Americans were (naturally!!) eager to stay out of the war that was raging in Europe. Woodrow Wilson was re-elected on his campaign slogan, “He kept us out of the war...” Moreover, most of the newspapers favoured the Central Powers over the Entente Powers and were largely pro-German. A German submarine managed to evade the British blockade to make its way to America where it was greeted with great applause and amply supplied for its return journey. Suddenly, however, the press, owned by the same financier families, changed their tune, as did President Wilson, and Germany was now the enemy and Wilson came out with his statement about wanting to ‘make the world safe for democracy’. The excuse was Germany’s employment of unrestricted submarine warfare but the Kaiser had suspended this for a long time believing that Woodrow Wilson would put pressure on the British to stop their illegal blockage, which was leading to starvation for the people of Germany and Austria-Hungary. Woodrow Wilson refused to intervene but even when unrestricted submarine warfare was unleashed, the Germans allowed for the free passage of ships between Britain and America twice a week, and ordered U-boat captains to give plenty of warning to allow ships to be evacuated and passengers taken to safety before sinking them. A huge propaganda campaign began in America stating that the Kaiser wished to take over the world! Ironic, considering that Wilson’s real motive for dragging the American people into the war was to have a say in the peace negotiations which would involve the dismantling of empires (particularly Austria-Hungary), destroying all autocracies and imposing a new world order on just about everyone! 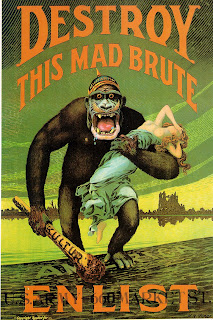 Germany was an autocracy but it was a very prosperous nation and had introduced Labour Laws, retirement pensions, sick pay and other benefits for workers long before anyone else did. What became of Wilson’s idea to ‘make democracy safe for everyone’? A grand imposing idea  that led to Hitler, Stalin and Trotsky (who, incidentally, had been driving round New York in a limousine before setting sail for Russia, and was released from captivity in Canada on the orders of Britain and America so that he could continue the revolution in Russia) and Lenin, who – great socialist that he was! – had been living in relative luxury in Switzerland before being funded by the financier Jacob Schiff and others, to cause such disruption in Russia.

Everything....everything we were taught about the First World War is a great myth and one that involves a good deal of hypocrisy! This is but the tip of the iceberg. I would go so far as to say that up until that time, it was the great crime ever committed against humanity, the greatest con in history and even to this day people believe the lie that it was an Imperial War led by kings and emperors.

What was it Fielding said about the difference between hypocrisy and vanity?

(As a later added postscript....Here is a brilliant article: http://drchojnowski.blogspot.co.uk/2006/10/1917-democratic-jihad-and-popes-peace.html )
Posted by Christina at 15:16 5 comments: Links to this post