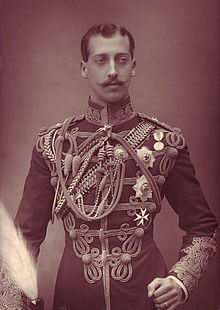 A recent BBC documentary about King George and Queen Mary made frequent disparaging references to George’s ‘dissolute’ older brother, Prince Albert Victor, Duke of Clarence and Avondale. Until a few years ago, I was under the impression that ‘Eddy’ as he was known in the family was an unintelligent wastrel and his untimely death on January 14th 1892 was something of a blessing for the country as he would have made a very inept king. Happily, I have since discovered that this image of the prince is without foundation.
So unpleasant is the way in which this poor prince has been presented that he was even, for some bizarre reason (undoubtedly to sell books!) posthumously accused of being – or being associated with – Jack the Ripper! Such a notion is totally without foundation and the stories attempting to make the association become increasingly wayward despite the fact that Court records prove that Prince Eddy was not even in London at the time of the murders! Other books suggest that he didn’t die in 1892 but was hidden away by the family and later became ‘the Monster of Glamis’!! Poor Albert Victor!
The fact that one of his associates was involved in the Cleveland Street scandal also led to various spurious allegations about his dissipated life and some authors claim that the stories of his dissipation are supported by Queen Victoria’s letters. In fact, like many a grandmother, Queen Victoria might well have worried about her grandson’s morals – we need only think of her response to the Prince of Wales as a young man becoming involved with the actress – but there is nothing to suggest that Prince Albert Victor was any more licentious (in fact he was probably less so!) than most young men of his era and class. His younger brother, George, also had a mistress at the time and yet he is portrayed as the model of sobriety and morality!
Further accusations concern his laziness (something of which his father, Edward VII was also accused) and his lack of interest in study and inability to learn. The same allegations of a lack of intelligence were made about his brother, George, but again this is forgotten! Albert Victor had inherited his mother’s deafness and there is a likelihood that this might have made him seen ‘absent’ at times and also hindered his learning but by the time he was a young man, he was different from the image which has since been presented of him.
Recently discovered letters written from the prince to the Prime Minister and to his friends show that he had a very real and sensitive grasp of the tricky political situation in Ireland and, had he become king, he might even have succeeded in bringing harmony to that country in a way that successive kings and governments failed to do. Repeatedly, too, letters from his family and from others refer to his kindness and his understanding. When he died at the age of only 28, the country and his family genuinely mourned his passing and even the Prime Minister, Gladstone, wrote in his diary that the prince’s death was great loss to the country and to his party. Gladstone was hardly a sentimental man and such a tribute cannot be overlooked.
It is only since his death that this poor prince has been the subject of all kinds of scurrilous slanders and there are times when I wonder whether this wasn’t done to bolster the image of King George V – as though to say, “Aren’t we fortunate to have this king....look at whom we might have had!” Although it is impossible to say for certain, judging by Eddy’s warmth and understanding, I venture to suggest that, had he lived and become king, he – unlike his brother - would have welcomed the Russian Imperial Family to Britain after the revolution and proved himself to be a very popular and well-loved monarch, with great similarities to his mother, Queen Alexandra who endeared herself to the people throughout her life. It seems very wrong that people go on – even on BBC documentaries – glibly repeating the old lies and creating more and more fanciful and lurid stories about this innocent man.
Posted by Christina at 06:05

Christina - thank you for this very informative post on Prince Albert Victor. It seems as though he has long been the victim of some strange misunderstandings and oft repeated myths which have no basis. Like you, I quite agree about the possibility of him allowing the Russian Imperial Family to come to Britian during the revolution had he lived to be King - what a shame!

At one time he was considered a suitor for his Hessian cousin who became Tsaritsa Alexandra of Russia. Things would've been different had they married.

Thank you Val :-) and thank you Elisa :-)
And yes, indeed, Queen Victoria would surely not have been so eager to promote a match between her grandson, Albert Victor, and her favourite granddaughter, Alix, if she had thought there was a sinister or totally amoral aspect to him! Queen Victoria was very disappointed (but understanding!) that this marriage didn't come about.

I found this post via a link from Tea at Trianon & have subscribed to your blog :) I didn't know much about Prince Albert Victor but I'm not surprised he's been so maligned (and I agree with your theory on bolstering George's image to be the cause). This happens a lot in history (especially to women!) and it really makes me wonder how much of it that we take for granted is really the truth!

Thank you very much for subscribing and commenting, Keri :-). I agree with you wholeheartedly that so much of what we are 'taught' is inaccurate at best, a complete untruth at worst. I read a wonderful quotation yesterday (can't remember who said it, unfortunately): "History is a lie upon which we all agree."
And yes, I think women have been given a particularly bad deal by many historians...as have many kings. Happily, we have access to so much more information now and don't have to take the taught 'truth' for granted :-).
Thanks again for subscribing!

The Jack the Ripper stuff was always nonsense-- Eddy was nowhere near Whitechapel or even London when the murders happened. The myth started, I understand, about 40 years later and stuck, because people will believe anything about royalty. Look at this "People's Princess" rubbish about Princess Diana, who may well have been a kind person but was also narcissistic and superficial.

There is a new book about HRH Prince Victor Albert. Its author is Andrew Cook, ant the Title is "Prince Eddy: The King Britain never had". The presentation is somewhat similar to this blog. I am liking its lecture

Hi, I'm from India and now doing my ph D in Environment Management but I am also an avid enthusiast in British History and I came across Prince Albert Victor during my School studies since then I have been totally Captured by his mysterious personality and more so by the sinister attempts that have been made to malign his character and personality; to me he comes across as a very gentle, mature and understanding Royal who could have changed History for Better not only for England and Europe but may be for India as well. RIP my beloved Prince.

There is a research about Prince Albert Victor about what really might have been the matter with him, nothing horrible. Prince Eddy: a study of facts.

There is a research about Prince Albert Victor about what really might have been the matter with him. Prince Eddy: a study of facta.

Okk...Thanks for your reply @Anonymous

Okk...Thanks for your reply @Anonymous