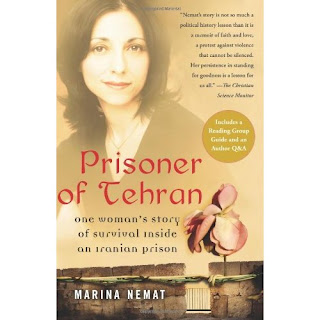 After watching interviews with Marina Nemat of Toronto, I was very moved and impressed to read her harrowing yet compassionate memoir, Prisoner of Tehran. She is a beautiful and poetic woman who writes of an idyllic childhood under the Shah followed by the shattering of her world during the Iranian Revolution. At sixteen, she relates, after criticizing the new regime in high school, she was arrested, tortured and sentenced to death, only to be reprieved at the last moment, but at a terrible personal price...

Her unusual perspective, as a Catholic Iranian of Russian extraction, makes the story especially interesting. It also lends ominous depth to her theme that revolutions often fail to deliver on their promises, since her family had already suffered from the bitter fruits of Bolshevism. As human rights advocates often approach matters from a more secular perspective, her emphasis on her faith is quite special. Her frank but sad admission of having betrayed her religious beliefs by officially becoming Muslim under duress is very honest, humble and poignant. She has stated in interviews that she grew up hearing of the lives of Christian saints and martyrs, and that it was awful to realize, under torture, that she would be willing to do anything, even sell her soul to the devil, in order to escape the pain and go free.

The same very human, relatable woman, claiming no extraordinary heroism, comes across in this book, although she seems heroic nevertheless. Her capacity to resist despair, her persistence in hoping and trusting in the mercy of Christ, and her generosity in loving and caring for others are wonderful. Her description of conceiving a child by her interrogator and rapist, who had forced her to marry him, and nonetheless being able to recognize the innocence of the child, is particularly touching. While I disagree with some of her radically pacifist statements, I appreciate her general point that it can be hard to judge people, even deadly enemies, since human beings are often such mixtures of good and evil.
Posted by May at 17:53

Thank you, Matterhorn. This must be a fascinating and inspiring book.
It's so difficult to know how any of us would respond in such horrific conditions. I once saw a documentary about people in extreme situations and how some were later seens as heroes, but they could not accept themselves as such; and others condemned themselves as cowards and could not forgive themselves for what they had done, but it was not their natural way of being, but rather a desperate response to pain, fear and panic.

Sadly, Marina has been attacked for sharing her story, even by other Iranians opposed to the current regime. She is accused of betraying her country, as if she were calling for a Western invasion of Iran, when she never advocates anything of the kind.

Then others, ostensibly even other former political prisoners, have accused her of lying about her past, claiming her story is too improbable to have happened- although others have defended her account. I am sure there are 'wheels within wheels' here but she always comes across to me as a very sincere and kind-hearted person. A friend of mine from Toronto who knows her personally, also says she is a very brave and inspirational woman.

I can not thank you adequately for the posts on your web site. I know you'd put a lot of time and effort into them and hope you know how much I appreciate it. I hope I'll do exactly the same for someone else at some point.

Thank you, Matterhorn for bringing this woman and her experiences to light for us here. Sounds like a very interesting book that I hope to read soon....