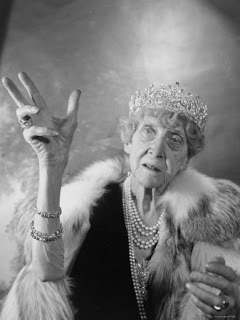 This is not a new post (it is taken almost directly from my other blog), nor is it a myth of history, but it is a rather touching story for Hallowe'en.

Queen Victoria’s charming granddaughter, Princess Marie Louise of Schleswig-Holstein, in her most beautiful book, “My Memories of Six Reigns” – in which she comes across as such a delightful, interesting, lovely person of great humility and filled with admiration or understanding of almost everyone she met (including her husband who treated her so badly) – writes of some fascinating and interesting mystical/ghostly experiences. This one, however, is quite beautiful.

“On my return to England, after the dissolution of my marriage, I took a small house in South Kensington and this is what happened to me soon after I moved in. I was arranging my books and odds and ends in my sitting room when the door opened and in walked my eldest brother, Christian Victor. “Oh 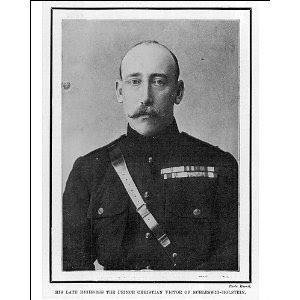 Kicky, [the pet name we brothers and sisters always called him by], how nice to see you again.” He replied: “I just came to see that you were all right and happy.” He sat down in the chair next to the fire, and I then noticed he had his favourite dachshund on his knee. We talked a little, then he got up and told me I was not to follow him downstairs, that he was very happy and all was well with him. After he had gone and shut the door, I realised that he was in khaki but did not have his medal ribbons on. I then remembered that during the South African War, an order had been issued that officers were not to wear their ribbons so that the enemy would not be able to distinguish them from their men. Only then did I suddenly realise that this dearly beloved brother had died eighteen months previously and lay in his last resting place in South Africa.
My sister came to see me that same afternoon and I told her of what had taken place. She was sitting in the same chair as he had done and when she got up she remarked, “I know he has been here – I can feel it.”

Ooooo, perfect story for Halloween! I'll have to find her book. It sounds like a fascinating read.

Thanks, Heather :-) It is a very lovely little book, filled with interesting anecdotes of people and places; and filled, too, with wise insights from a princess who had known scandal and unhappiness but always seemed to see the best in everything and everyone. Her chapter on her mystical experiences is fascinating, too. It's one of my favourite books and I highly recommend it!

What a wonderful story. It is indeed perfect for Halloween, but instead of giving an eerie feeling, there is something sad about it. Thanks for sharing it, Christina!

Thanks, Gem. I think it is quite a happy and uplifting story, too :-)

Thank you for sharing this lovely story! The feeling it gives is so warm and mysteriously comforting.

Thank you and welcome from me, too, Svea :-)

What a lovely post Christina....and a little bittersweet too. Thank you for sharing!