With great excitement, I opened a new book today – a relatively recently 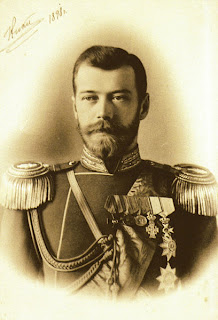 published history of Tsar Nicholas II in the First World War – and within two or three pages my heart sank to read the same old repeated phrases along the lines that Nicholas was indifferent to, or oblivious of what went on outside his immediate environment, that he was a ‘weak’ Tsar and not a very intelligent man. This presentation of Nicholas seems to be one of the greatest myths – or downright untruths - of history and it is repeated so glibly and so often by academics as well as other commentators.
The first myth – Nicholas’ supposed indifference, or rather stupidity – is often based on his diary entries. Clearly, he was not a man who had a great deal of time to keep a journal when he was so engrossed in the pressures of his office that he often worked from dawn till the early hours, snatching only a few hours sleep on a divan in his study. The fact that he writes, “I shall take up dominoes again...” or that at his abdication, he said, “I shall go to Livadia; I like the flowers there...” is taken completely out of context. How often, in the midst of hectic circumstances, do you think of some simple pleasure that you would so love to enjoy again? At the end of an extremely exhausting day, it is a relief to think of ‘gentler’ days and what you might do if you were free of the present demands. One one level, these lines show the heart of the man but, taken out of context, do not capture his character at all. There are several accounts of Nicholas being woken in the middle of the night to deal with an issue which, in the overall scheme of things, might seem unimportant - a lowly peasant needing help; a prisoner whose family came desperately pleading his cause – and in each case Nicholas responds with the utmost concern and understanding. On a larger scale, of all the European monarchs, Nicholas was the one who saw most clearly the means to prevent war. Following the defeat of Bulgaria in the Second Balkan War, for example, it was Nicholas who pointed out that unless the Bulgarians were given access to a sea port, trade would be impossible and the country would be ruined, and this would eventually lead to another war. At the height of the July crisis in 1914, Nicholas was the one who suggested taking the whole matter to an international tribunal at the Hague in order to find a peaceful solution and avoid war. When war broke out, Nicholas marched for ten miles carrying the pack of an average soldier in order to understand first hand what was expected of his troops; and his decision to take personal command of his army sprang from his awareness that he could not ask others to endure what he would not endure himself. Even his abdication was a result of his refusal to turn his troops on his own people.
The second myth – Nicholas’ alleged weakness – is equally easy to dismiss as false when one looks beneath the surface. Physically, he was a strong man who played tennis and swam and enjoyed outdoor pursuits. Morally, he was a strong man who adhered to his faith, who refused to betray his allies even when that cost him a throne, and who went into captivity with the utmost dignity. Emotionally, he was a strong man who continued his public duties while concealing his deep sorrow and anxiety over the health of his beloved haemophiliac son, Alexei; and who remained adamant that he would only marry for love even though it took six years for Alix to accept his proposal. Spiritually, he was a strong man who, even when everything had been taken from him and he had been humiliated and taken into captivity, remained true to his religious convictions and faith in the goodness of God.
The third myth – Nicholas’ supposed lack of intelligence. Well-read, fluent in several languages, fond of foreign literature and steeped in knowledge of Russian history, had he been an average young man in England at the time, he would probably have gone straight to Oxford or Cambridge. The complexities of the Balkan Wars and international politics leave politicians baffled to this day but Nicholas had a ready grasp and understanding not only of the situations but also of the characters of the people involved.
There are so many more examples of Nicholas’ courage, strength and wisdom that it is almost unbelievable to open a book, published in the 21st century, that repeats the old re-hashed lies, “The Tsar was weak and so absorbed in the trivialities of his day to day life and indifferent to his people that even when revolution came, he just wanted to play dominoes....”
People still publish these things??
Posted by Christina at 16:35

Oh, I understand...I hate this kind of glib and false treatment of historical figures.

Very eloquent, Christina! Thank you for tackling one of the most-oft repeated myths in current history. It's about time!! I remain quite unconvinced that any Tsar might have been unable to prevent war, and ultimately revolution at that time. Nicholas was a loyal man and did what he thought was best for his country at the time.

The effort to make the Tsar appear as an evil man could never gain traction -being so far removed from reality, that it was then decided to make him appear as a well intentioned but pitiable dupe. Much the same was done to King Louis XVI -if people cannot buy that they were evil then they must have been weak and stupid. The Tsar may have made some mistakes but what I always wish the critics would say is what they would have done differently and how that would have worked out.

Hi, I just found your blog via the "Tea at Trianon" blog which I have enjoyed following every day for some months now (thank you Ms. Vidal). I'm fascinated with the tragic story of the last Russian royal family, have been for a long time. After reading this post, I wonder if anyone here could recommend any good history books that tell the real story of Nicholas II and his true character? Are there any out there? Thanks very much and I'm enjoying this blog too.

We thank you for your kind words, Maraldo. As for history books on Nicholas II, if I think of something I will mention it, but hopefully Christina can better answer your question.

Thank you, Val for your lovely comment and thank you, too, Mad Monarchist What you wrote makes so much sense!
Thank you, Maraldo! In spite of it not being a very new book, I believe that the very best biography of Nicholas, is Robert Massie's 'Nicholas & Alexandra'. Although not a biography, another wonderful insight into the Romanov's world is "A Lifelong Passion" - a selection of letters and diary entries - compiled by Sergei Mironenko and Andrej Maylunas.

Maraldo, I second Christina's book recommendations. Massie's "Nicholas & Alexandra" is a great start to the story. "A Lifelong Passion" is one of my favorites - you can actually read some of their letters and diary entries. My 1st introduction to the last Imperial Family of Russia was through Peter Kurth's "Tsar: The Lost World of Nicholas & Alexandra" - it has some wonderful photos in it too :-) There are people who do not like Edvard Radzinsky's particular style of writing and story-telling, but I still recommend his book: "The Last Tsar: The Life and Death of Nicholas II". Hope these suggestions help you and welcome to the blog. We are happy to see you here!

Yes, I agree, Val! I really enjoyed Edvard Radzinsky's style and his book is really worth reading!

Christina - I'm glad you enjoyed it too. I recall some people (over at a certain forum) had difficulty in reading or interpreting his book or play of events. Sorting fact from fiction isn't an easy job. He is a playwright and has a dramatic touch! Either way, I still enjoyed it a great deal....as his work on Rasputin.

Thank you very much Matterhorn, Christina and Val for your friendly welcomes. Thank you also for your great book recommendations. I have seen Robert Massie's well known book "Nicholas and Alexandra" in bookstores and libraries but I've never picked it up. Now that you have all mentioned it, I will be sure to get it. I have seen the 1971 movie based on the book though. I'll see if Amazon possibly has it available as an e-book since I have a Kindle reader. I'll also check out the other titles, especially the picture book, I love looking at pictures of the family. Thanks again and keep up the good work!

Maraldo - we are so happy to see you here! Sounds like you are well on your way to checking out the basics on the Romanovs. Stay tuned, I have a post on basic Romanov readings in the works. Thanks again and enjoy!

Since childhood I have felt an unexplainable compassion for the Romanov family, and finding myself being upset when Nicholas was characterized as stupid, weak, and indifferent to his people. Personally, I am opposed to monarchy, and yet, this family's story and the negative characterization of the tsar makes me question how much of what we are told is true and how much is malicious fabrication.