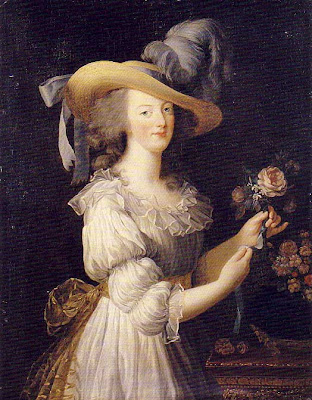 In the early 1780's, Marie-Antoinette abandoned the ostentatious styles which characterized her first few years as queen, substituting them with simple attire. Especially at Petit Trianon, the gowns of lawn or muslin were worn not only by the queen but by all the ladies present. As described in Rocheterie's biography:


At Trianon there was no ceremony, no etiquette, no household, only friends. When the queen entered the salon the ladies did not quit their work nor the men interrupt their game of billiards or of trictrac. It was the life of the chateau with all its agreeable liberty, such as Marie Antoinette had always dreamed, such as was practised in that patriarchal family of the Hapsburgs, which was as Goethe has said, "Only the first bourgeoise family of the empire." They all met together for breakfast which took the place of dinner afterward they played cards chatted or walked and assembled again for supper which was served early. No fine dressing no complicated head dresses whose exaggerated height had forced the architect to enlarge the dimensions of the doors and provoked the reprimands of Maria Theresa. A dress of white percale, a gauze fichu, a straw hat - such was the toilet at Trianon, a fresh and charming toilet which set off the supple figure and brilliant complexion of the goddess of place but whose extreme simplicity enraged the weavers of silk at Lyons deserted for the linens of Alsace.

Indeed, Marie-Antoinette's simple tastes drew even more criticism upon her than her former opulence. With her unpowdered hair and linen dresses, she was accused not only of trying to put the French silk merchants out of business in favor of her brother's Belgian and Alsatian weavers, but she was blamed for lowering the prestige of the monarchy by being too casual. According to an article on the queen's hairstyles by scholar Desmond Hosford:


Marie-Antoinette's excesses during the 1770s had been criticized, but when the queen curtailed such luxury she was again found to be at fault. In 1778, Marie-Antoinette gave birth to a daughter, which did not solidify her political situation, but the birth of a dauphin in 1781 meant that she had finally fulfilled her duty to France. Unfortunately, according to Léonard, "At the end of the year 1781, that is to say, when the queen had given to France the first Dauphin, who died in 1789 . .. Her Majesty was in danger of losing the charming locks whose suave color had passed into fashion under the name cheveux de la reine."42

Léonard's solution to the queen's predicament was no less than to cut her hair and to abandon the imposing coiffures that he had created. Instead, he invented the coiffure à l'enfant, a simple style frisé with curls in the back, which characterized the second half of the reign (fig. 5). This simplification of the queen's hairstyle was also effected in her attire as she entered the age of maturity. However, the queen's new simplicity was as unpopular as her former extravagance. One fashion that Marie-Antoinette adopted, a loose-fitting simple gown of muslin, became known as the chemise à la reine. In 1783, Vigée-Lebrun painted the queen in such a gown, and the work was so severely criticized when it was exhibited at the Salon of the Académie royale de peinture et de sculpture that year that the painting had to be withdrawn (fig. 6).43 One of the fundamental problems with this portrait was that Marie-Antoinette had allowed herself to appear as an individual woman, rather than as the queen of France, in a work shown to the public. This transgressed the laws of royal representation in France, destabilizing the performative elements of the queen's station. Marie-Antoinette "en chemise" lacks any external manifestation of her status as queen, and this was unnerving, because already, as l'Autrichienne, Marie-Antoinette was perceived as dangerous. Previously, the rumor had been that the queen's profligacy, dragging all French women in its wake, would ruin the country, but now the silk industry attacked the queen's simple attire. Marie-Antoinette was accused of attempting to destroy a vital part of the French economy by wearing imported fabrics including muslin and cotton44 for a gown whose style had originated in England, another of France's traditional enemies. In this portrait, Marie-Antoinette was even accused of appearing in her undergarments,45 and one might observe that her hair, too, is almost entirely undressed. With such importance placed upon the performative aspects of the queen's toilette, it is not surprising that this portrait, of which the queen's hair is an important element, was readily perceived as a blatant act of disrespect for French propriety concerning the external manifestation of royal dignity, a subversive rejection of queenly representation, and a national degradation which one commentator labeled "France, in the guise of Austria, reduced to covering herself with straw."46 The responsibility for this portrait was placed squarely on Marie-Antoinette without whose authorization the work could never have been displayed.47 Marie-Antoinette's attempt to exercise agency over her own hair and dress had failed, and the new version of the portrait painted by Vigée-Lebrun that same year is clearly a retreat. In the second version of the portrait, the queen's blue silk gown, as characterized by the baron von Grimm, is "a garment more appropriate to her station,"48 and her hair is carefully dressed and powdered (fig. 5).

No matter what she did, there were those who would complain and criticize. Some criticism is par for the course when one is a public figure. In Marie-Antoinette's case, her Austrian birth made her an object of suspicion from the moment she stepped onto French soil, even among the royal family. For those who sought political power by undermining the royal regime, the queen of Louis XVI, with her beauty and youthful imprudence, was the perfect target.

--
Elena Maria Vidal is the author of the historical novels Trianon, Madame Royale, and The Night's Dark Shade. Please visit Elena at her Tea at Trianon blog and on Facebook and Twitter.
Posted by elena maria vidal at 16:15

Poor Marie Antoinette... because she was Austrian the French in general just hated her...
if only her mother didn't arrange this political marriage how different her life could have been.
Lorraine

Thank you for a wonderful post, Elena! This also reminds me of Alix of Russia - blamed for simply being Tsarina in an age where suddenly Tsars were the ememy, and yet even more criticsed by the artistocracy for the simplicity of her life and her eagerness to involve the rich in meaningful work which would have been of benefit to everyone....
People are so quick to judge and to create scapegoats :-(

Wasn't Alix also accused in Russia of working for the enemy in WW1? That would be another point of comparison with M-A. Both were princesses from foreign, German-speaking countries who became scapegoats for the ills of their adopted countries.

Oh yes, Matterhorn, and both also had a son whose health caused them so much anxiety. In a terrible comparison I have often wondered whch of the two suffered most and can't help thinking that at least Alix 'chose' her husband and loved him from the beginning, and also - in spite of the awfulness of what happened to the Romanovs - she was with her children and husband right to the end. Poor Marie Antoinette was denied even that....

Thank you, all. Yes, Marie-Antoinette suffered her entire life.

I agree, Victoria. She could please no one.

Thank you Elena for your lovely post on Marie Antionette. No matter what she did, she was always the subject of someone's harsh and unfair criticism...