The Life and Times of Frederick Douglass 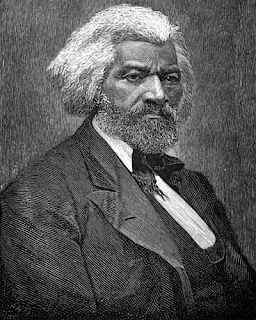 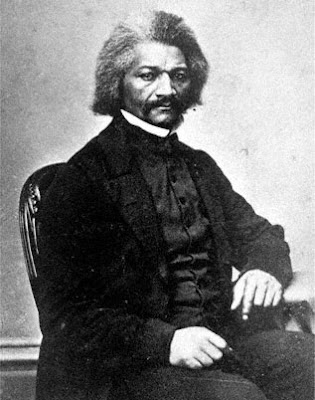 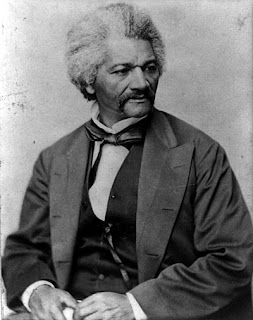 This summer, I read The Life and Times of Frederick Douglass (1882), the autobiography of the great African American orator and abolitionist, famous in his time but often neglected or forgotten today. Part slave narrative, part political memoir, the book is very touching and inspiring, as well as very insightful in describing the disastrous moral, religious, social and political effects of slavery on the United States.
Despite many bitter experiences, Frederick Douglass seems to have been a very noble and kindhearted person, who cared deeply for the elevation of his people. I also admired his willingness to learn and to change his views when appropriate. As a young man, after escaping to Massachusetts from a harsh life as a slave in Maryland, he became a staunch follower of William Lloyd Garrison. According to the Garrisonians, the Constitution of the United States, since it allowed for slavery in the South, was a pro-slavery document, and, therefore, any participation in the American political system was morally wrong. Abolitionists, Douglass thought, should refrain from voting, and the Northern states should immediately dissolve the Union with the Southern states. Later, after further research and study, Douglass broke with the Garrisonians. He concluded that the Constitution was actually an anti-slavery document, and that the American political system was intended to promote liberty and justice. Thereafter, Douglass' concern became preserving the Union and working to end slavery within the framework of the Constitution. He put this determination to great effect during the Civil War, actively recruiting black troops for the Union cause.

Like many abolitionists, Douglass initially despised Abraham Lincoln for tolerating slavery where it already existed in the South, and for merely opposing its extension into new territories in the hope that this containment would ultimately lead to the extinction of slavery.  After actually meeting Lincoln, however, Douglass developed a deep personal admiration and affection for the President. In the fragile and explosive political climate of the time, Douglass also came to appreciate the prudence of Lincoln's incremental approach to emancipation and black civil rights. (By contrast, Douglass thoroughly disapproved of Lincoln's successor, Andrew Johnson). Nonetheless, Lincoln and Douglass still had their disagreements. On one occasion, Douglass arrived at the White House to seek justice for black Union prisoners murdered or sold into slavery by the Confederates. Outraged, the fiery Douglass recommended that Lincoln should immediately retaliate upon Southern prisoners, whether or not they had personally been involved in the crimes, but Lincoln was understandably upset at the idea of punishing the innocent for the guilty. He also worried that retaliation would lead to a vicious cycle of brutality and revenge. (Eventually, he did issue a retaliatory order, but it was not enforced). In his memoir, Douglass says he respected Lincoln's humane spirit, but still could not agree with him…

After the war, Douglass was naturally overjoyed that slavery had finally come to an end. Yet, he also felt a strange sense of sadness and regret, as if the noblest part of his life were over. He soon realized, however, that there was still much work to be done, and devoted the rest of his life to helping his fellow freedmen to rise.

Here is a short documentary about the life of Frederick Douglass. The actors are well cast, I think, and the film conveys the spirit of his memoir.

Matterhorn, thank you for this very interesting post and wonderful video! I love the way in which he totally embraced and spoke out for the freedom of all people and was even prepared to incur his family’s criticism by marrying a white woman.

May I ask your opinion of Lincoln? After reading several articles about him, he seems to me to be the very opposite of the emancipator of the slaves (in fact, it seemed he only did this when it was politically expedient for him to do so). I have read some extremely racist remarks which he wrote, and also read of his plans to either deport or create colonies for the former slaves to segregate black and white people.
Another interesting (and quite shocking to me) realisation was that the intention to prevent the spread of slavery was not through concern for the slaves, but rather because ordinary white labourers felt they could not compete with the free labour provided by slaves.
As a non-American, I might be mistaken but it also appears that the Civil War, which has come to be seen as a war to free the slaves, in fact had nothing to do with slavery originally – it was more about creating/maintaining a central government and removing the rights of individual states, which did legally have the right to secede, didn’t they?

None of this, of course, detracts from the great courage of Frederick Douglass and men like him – thank you so much for the video and your very interesting post!

Thank you for the kind words, Christina. Obviously Lincoln and the Civil War are huge, controversial topics of their own, too long and complicated for a comment. This article goes through some of the points you mention:

Personally, I don't believe states have a legal right to secede and I do think that Lincoln, while a fallible human being, did have a strong moral conviction against slavery. But slaveholders had certain legal rights, and the social climate throughout America (both North and South) was very racist. All this put severe limits on how much Lincoln could do to promote emancipation and racial equality. Many people thought blacks and whites would never be able to live together in peace, hence the colonization schemes. But Lincoln never intended to force blacks out of the country, participation in these schemes was supposed to be voluntary.

The racist-sounding statements I think you are referring to come from a series of 1858 public debates between Lincoln and one of his political opponents, Stephen A. Douglas (not to be confused with Frederick Douglass, of course), where the question of allowing or forbidding the extension of slavery into new territories was being discussed. Lincoln opposed the extension, on emphatically MORAL grounds (just read the debates, which are all available online, in the Collected Works fo Abraham Lincoln), although he also appealed to the self-interest of his audience, regarding competition with free white labor, as you mention. Stephen Douglas, who was in favor of allowing slavery to spread to the territories, tried to distract the audience from Lincoln's moral, political and economic points, by race-baiting and accusing Lincoln of trying to introduce all the "horrors" of full racial equality.

In this context, Lincoln denied he was seeking to give blacks full civil equality, trying to draw attention back to the question of slavery itself. At that point, it was challenging enough to get whites to see that it was wrong for blacks to be enslaved, let alone get them to accept blacks as their full social and political equals. But Frederick Douglass, for one, said that Lincoln was the ONLY white man in a high position in America who ever treated him, personally, as a full social equal, whenever they met. Considering all the full-blown abolitionists Douglass had met throughout his career, it's a strong statement. And Douglass certainly had the impression that Lincoln had a deep moral conviction against slavery, from their private talks.

As for the Confederates, they were very clear, in their secession documents, that they were seceding to protect slavery, which they saw as seriously threatened by Lincoln's election. Their own vice-president, Alexander Stephens, called slavery the "cornerstone" of the Confederacy, in a public speech. Slavery was also strictly, explicitly, and perpetually protected in the Confederate Constitution. Not even states were allowed to ban it, within their own individual borders. (So much for 'state's rights'!)

Let me just add that I'm not trying to bash the South. (I myself had ancestors from Maryland who fought for the Confederacy, and who were slaveholders.) But truth has its rights.

Thank you very much, Matterhorn, for the link and the information. As you say, the subject is far too complex to be discussed in comments but I found your explanation very interesting and appreciate all you've written! Thank you!

Thank you, Christina. I just don't see how the whole idea of states being legally able to withdraw unilaterally from the Union squares with either the social compact theory of the American Founding, or the textual provisions of the Constitution, which gives the federal government authority over national issues and state governments authority over state issues. Individual states are not supposed to act on their own in matters which impact the whole Union, which secession obviously does. And then, the reasons the Confederate leaders had for seceding seem disreputable, to say the least. Still, I am sure most of the rank and file sincerely saw themselves as defending home and family from (as they perceived it) Northern aggression. They certainly fought very bravely, long after prudence would have dictated giving up, and it would be hard to do this if you weren't convinced you were in the right. Even their leaders seem to have genuinely believed that slavery was all right and proper and 'ordained by God'.

Thank you Matterhorn for the excellent article, further information and link to the video! It is very much appreciated :-)

Thank you, Val! I usually write about all sorts of other countries, so it was nice to finally write something about my own.

I've always felt that if there was to be a public holiday honoring a black American, then is should've been Frederick Douglass, and not MLK, whose politics and personal behavior were, as seen in the Jackie Kennedy tapes released this week, problematic.