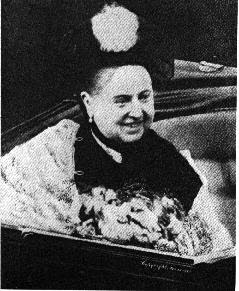 According to her granddaughter, Princess Alice of Albany (Countess of Athlone), Queen Victoria insisted that she never said, “We are not amused” but that four-word phrase – alongside the perpetual mourning for ‘angel Albert’ - has seeped into the popular imagination and created a totally false picture of the Queen as a very sombre and dreary woman.
In fact, Queen Victoria was often highly amused. Lady Longford, in her wonderful ‘Victoria R.I.’ recounts a humorous story of a meal at which the Queen sitting next to an elderly admiral who was very hard of hearing. The Queen asked about the progress of repairs to a wrecked ship but the admiral did not catch her words. Out of the politeness, the Queen tried a different conversation, “How is your sister?”
“Ah,” said the admiral, suddenly realising what had first been said, “She’ll be fine, ma’am, when we turn her over and scrape the barnacles off her bottom!” The Queen was so overcome with laughter that she had to hide her face in her handkerchief.
There are numerous similar stories of Queen Victoria’s laughter, and her letters show her wit and humour. One amusing anecdote comes from Marie Mallet who says that a certain duchess presented the Queen with an ostrich egg on which she had written her own name. “You would think,” whispered the Queen, “that had laid it herself!”
Alongside her humour, there was a curious innocence and wonder about Queen Victoria. Perhaps because her own childhood had been so dull and she had been deprived of companions, she was particularly fond of children’s amusements. Her granddaughter, Marie of Roumania , wrote:
“So unspoilt was dear grandmamma in all things concerning amusements that her joy and interest in these performances was almost childlike.”
She also enjoyed ‘frivolous’ novels, circus troupes, travel, the pageants and plays performed by her children and she delighted – to the end of her life – in learning about different places and mastering different languages. One of her greatest pleasures was dropping into highland cottages near Balmoral to take a nip of whiskey and sit and talk with the local people.
She might have been ‘the widow of Windsor’ for six years or so following Prince Albert’s death but these six years of mourning are quite a small part of a life that spanned eight decades – a life that, for all its tragedies, was often filled with enjoyment and simple pleasures and a good deal of amusement!

Christina, your post has brought a huge smile to my face. What a lovely photo of the Queen and what fun stories! There is a reason why the majority of her grandchildren enjoyed her so much :-)

Thank you, Val :-). This was the photograph that was taken at her Diamond Jubilee and some members of her family (probably Beatrice!) said it shouldn't be published as she was smiling so didn't look regal enough!! QV said something to the effect of, "This is who I am...let people see me like this..."

Christina, I do remember seeing the photo before and thinking it might have been at her Diamond Jubilee - thank you for comfirming. Had no idea that QV said that of the photo; what a nice story behind it!

It was impossible not to smile while i read this.
What a charming lady! She is one of my idols:)

Thank you for your comment, Violet. I agree...she was very charming and such a unique character. I smile and laugh all the time when reading her letters :-)

Charming post, but she was in mourning for 40 years, not 6.

She was a wonderful woman & queen/empress that it is amazing she still fascinates to this day in 2018. Incredible