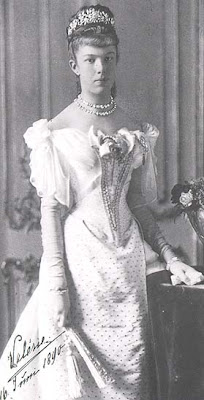 The fourth and favorite child of the legendary Empress Elisabeth, Archduchess Marie-Valerie of Austria was a deeply religious, charitable and practical woman. She bravely faced many tragedies; a disappointing marriage, the "suicide" of her brother, the assassination of her mother, a world war, and the collapse of the empire of her forefathers, before dying of cancer at age 56. A charming, artistic soul, she seems to have been a delightful blend of the piety and common sense of the Habsburgs and the poetry of the Wittelsbachs.

Here is a description of Sisi's relationship with Valerie from Clara Tschudi's biography of the Empress:


The year following the coronation in Hungary, and ten years after the birth of the Crown Prince, a little girl was born, the Archduchess Marie Valerie, in the royal castle at Buda, April 22nd, 1868.

The joyful event was announced to the populace by the firing of cannon from every fortress at six o'clock in the morning. It was the first time for a century that a royal child had been born in Hungary, and the delight of the Magyars was unbounded. As night approached, the whole city was illuminated, and crowds filled the streets, hundreds of them on their way to the castle to send up a ceaseless cheer and "eljen" for the King, for the new-born Princess, but especially for the Queen.

Valerie was the youngest and most cherished of Elizabeth's children, not that she did not love Gisela and Rudolph, but her mother-in-law, aided by governesses and tutors, had alienated them from her, and she had not been serious enough in her efforts to have them with her. Her maternal devotion had been lacking in the firmness and quiet self-sacrifice that would have commanded respect for her rights as a mother, and this had led her to relinquish all, and forsake her children.

But this time her motherly love was there in all its intensity, and the recollection of past sorrow was obliterated by the unspeakable tenderness she felt for the fragile little being that nestled in her arms, and from the moment of the child's birth she resolved to superintend her bringing up and development herself.

"In 1869 the Queen most kindly allowed me to dedicate one of my novels to her, and as the Royal Court was at that time in Buda, I was able to present a copy to her in person, and to enjoy a long detailed conversation on the literature of Hungary. As I was on the point of leaving, she said: 'Wait a moment! I will show you my daughter.'

She opened a side door and signed to a nurse, who brought the child into the room. The Queen took the little one in her arms and pressed her to her heart; I shall never forget the pretty sight."

Marie Valerie was very delicate as a child, and her mother was the first by her bedside in the morning, even after listening at the door more than once in the night to ascertain if she was asleep; and if the little one was ill her mother refused to leave her, and could with difficulty be persuaded to take needful rest."

She recognised with contrition that in consequence of the disagreement with her husband, she had neglected her children, and she was resolved to atone for her mistake as far as possible.

Even as Valerie has often been neglected in favor of her beautiful, troubled mother or her notorious, tragic brother, so Elisabeth's personal eccentricities and marital and familial problems have been emphasized at the expense of her more positive relationship with Valerie. It is fair to note that the very intensity of her mother's affection, arousing the envy of siblings and the criticism of courtiers, caused Valerie some pain and embarrassment. Nevertheless, Elisabeth's devotion to her youngest daughter suggests a depth of love and generosity perhaps too easily forgotten.
Posted by May at 15:07

A lovely post, Matterhorn - thank you!
The younger children of queens and empresses often seem to be forgotten by historians but it seems they are often closest to their mothers. Like 'Vicky' (Empress Frederick), Sisi was so young when she married that she was little more than a child herself when her elder children were born and had so much else to deal with, fitting into Court life, and learning a new role.Both Vicky and Sisi had overbearing mothers-in-law and both only seemed to have come into their own as mothers with their younger children (and both endured the loss of little children).

You make an interesting comparison regarding the younger children of queens and empresses. Perhaps, by the time their youngest children were born, these ladies were more experienced and better adjusted to their roles, enabling them to be more effective mothers. And then I suppose there is always the special affection for the 'baby' of the family.

Yes indeed...the special affection for the baby of the family :-) Vicky described her youngest child, 'Mossy' as "My Benjamin" :-)

This is a father/daughter case, but I also think of King Leopold III of Belgium and his youngest daughter, Princess Esmeralda, who continues to perpetuate his memory and many of his interests relating to nature conservation.

It is a lovely tribute to him that she continues his work, isn't it?

I can identify with Marie-Valerie. Parents often tend to be over-protective with their youngest children, especially when there are tragedies in the family.

Sisi did have many good qualities although she treated her husband somewhat badly. These qualities, however, such as her closeness to her youngest child and her support for the Hungarians, are sometimes forgotten. Her eccentricities are often emphasized too much.

Thank you for inviting me to this blog. It's wonderfully interesting!

Thank you, Viola, and welcome!

Thank you for the thoughtful and informative post, Matterhorn! Have learned so much from your posts. It seems as though many times, the youngest children are often closest to their mothers...many times they were expected to stay close to home to be of service to them.

Thank you, Val. It is interesting that both you and Christina have commented on this phenomenon of youngest children. I wouldn't know from first-hand experience. I don't have siblings.

Matterhorn - from personal experience I would say that my sister are Mom are very close. My sister being the youngest of the family ;-) The "baby" of the family sometimes has a special spot in the family. Certainly that was true of Alexei within the last Imperial Family of Russia....

Yes, it certainly was true of poor little Alexei!

Cher Colibri, This is a very good and moving post. You have the flame of understanding. Thanks. She looks so sad in her photograph.

Thank you, Sir! Yes, both Sisi and Valerie often look sad in their pictures.